I really love the English wine industry. I find it both intriguing and charming and I never tire of hearing, normally with a note of surprise, how someone or other had a bottle of English fizz the other day and how delicious they thought it was. Because it is Sparkling Wine on which we are solidly building our reputation as a country that is able to produce a high quality product, capable of competing with the best that Champagne has to offer. One such producer is Nyetimber who have been making fizz for over 20 years. They are based in West Sussex near Pulborough, about 15 minutes away from where I grew up.

The reason that English fizz can be compared directly with Champagne is because it is made in exactly the same way; the same grapes are used – Chardonnay, Pinot Noir and Pinot Meunier – as are the same vinification techniques. Perhaps most importantly the exact same strain of chalk that runs through the soils of Champagne continues under the channel and through the vineyards of Kent and Sussex meaning the terroir can be almost replicated. You will no doubt have heard rumours of blind tastings where an English Sparkling Wine has beaten the best of what Champagne has to offer and fooled all the experts into thinking it was the real deal! Well it’s all true!

Nyetimber produces a Classic Cuvee, Blanc de Blancs, Rose and more recently a Demi-Sec. Interestingly each Classic Cuvee is made as a vintage wine rather than the more common non-vintage (NV) in Champagne. This is a brave move as although it means you can end up with an outstanding wine in a good year, it means there is nowhere to hide in a bad one. And there are plenty of bad years in the UK! In fact last year Nyetimber (and I believe they were alone in doing this) scrapped the entire vintage and publicly announced that they would not produce any wine from 2012. As I said, a brave move.

What sets Nyetimber apart is that they have pitched themselves at the luxury end of market. Having gone through a recent rebranding their products certainly look the part and have price tags to match. They, perhaps wisely, have chosen to compete with high end, well recognisable Champagne brands rather than trying to slip in as the cheaper offering. I will be very interested to see how this works out for them as sadly the vast number of Englishmen and women would rather spend their hard earned money on a Champagne they have heard of (which therefore must be good) rather than an arguably better quality English Sparkling Wine.

We had the pleasure of trying the Classic Cuvee 2005 and 2004, the Blanc de Blancs 2003 and 2007, the Rose 2009 and the Demi-Sec. As suspected the difference in vintage really shows – for me the Classic Cuvee 2005 was the best; it had a creamy nose with a lovely round body and without the overwhelming acidity you can sometimes find with English wine. The 2004 was much more citrusy and just not quite as good. Similarly the 2003 Blanc de Blancs was way better than the 2007 and had great fruit concentration and a very good length. Apparently it won ‘best Sparkling Wine in the world’ in 2009 which is quite an achievement. The Rose was pleasant enough with a nice body but lacked any real depth of flavour which was a shame as I have really liked this wine in the past. The Demi-Sec was popular with everyone; a nose of passion fruit and a lovely nutty sweetness that balanced well with the acidity. 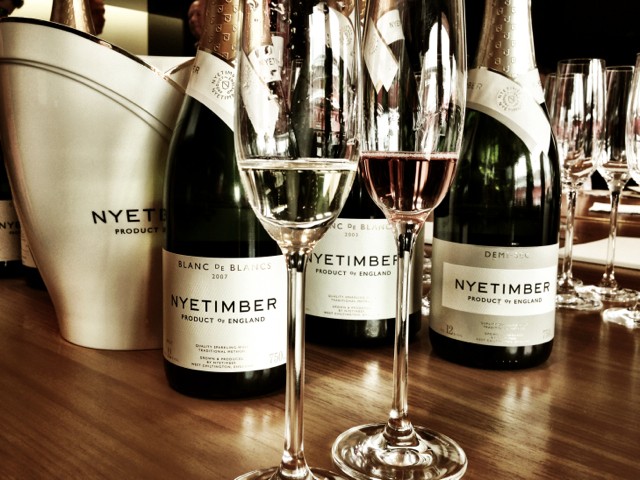 Overall I though Nyetimber were very impressive and they are obviously running a very slick operation. I wish them well against the big guns in Champagne and look forward to many more years to come of an English Winery winning the best Sparkling Wine in the world.